In the realm of finance, one of the most common disputes is over gold versus bitcoin.

In recent years, scores of pundits, billionaires, and analysts have taken sides on whether gold or bitcoin will be the best store of value over the coming years.

Last summer on CNBC, billionaire investor Ray Dalio said that bitcoin is like a digital version of gold. But he went on to say:

“If you put a gun to my head, and you said I can only have one… I would choose gold.“

Dalio admits to owning some bitcoin, however, and recently said that a 1%-2% allocation to bitcoin would be right.

Entrepreneur Mark Cuban is a big fan of bitcoin. He is on record as tweeting:

“It’s BETTER than gold. No worries about storing it. Easy to transfer. Easy to trade. Easy to convert. Doesn’t require an intermediary. Can be fractionalized.“

And he believes it’s the “best SOV [store of value] on the market.”

Why Both Gold and Bitcoin Belong in Your Portfolio

Last Wednesday, I showed you why the global central banks’ seemingly bottomless pit of new money means there’s no end in sight to the rampant speculation we’re seeing in certain markets right now.

It’s a factor of the growing disconnect I see between the markets and the overall economy.

And I promised to show you why you need to make room for both gold and bitcoin in your investment strategy.

The way I see it, gold and bitcoin shouldn’t be seen as competitors dueling it out for position in your portfolio. They have similarities and differences but are fundamentally perfect companions.

Each has different degrees of the following seven key attributes that are necessary to optimize an alternative investment in your portfolio.

History – Goldbugs tout gold’s long history compared to bitcoin’s nascent one. Gold was discovered more than 5,000 years ago. It served as a mode of currency in coin form since 550 BC. From the time of the Roman Empire through the dissolution of the gold standard in 1971, gold’s role in economic exchange enabled global trade and anchored the established monetary system.

Bitcoin, on the other hand, has only been around since 2009. So it certainly has thousands of years to catch up on gold longevity-wise.

Rarity – Both bitcoin and gold have scarcity value. There are limits on their volume, compared with other assets, particularly paper ones. Gold is essentially a scarce commodity. About 80% of all known gold has already been mined, with just 54,000 tonnes left to be dug out of the ground. At current mining rates, just 2,500-3,000 tonnes are mined each year.

Bitcoin’s scarcity comes from its underlying code. Currently, there are only 18.9 million bitcoins in circulation, with a cap of 21 million built into the crypto’s code. And every four years or so, in a process known as the “halving,” the new supply of bitcoin is cut in half.

Use Value – Gold has many uses. Nearly half (47% to be precise) of the world’s already mined gold is in jewelry. And about 40% is tied up in private and government holdings. And due to its high electrical conductivity, it is also used extensively in manufacturing and will be increasingly useful as the field of sustainable energy develops further. Bitcoin is transforming what constitutes money and how we use it. Through a growing suite of blockchain-based applications, it offers access to financial services to a global population, including those who don’t have access to traditional banking.

Store of Wealth – Throughout history, gold has been seen as a safe-haven commodity asset and inflation hedge. What that means is that as a longer-term investment, gold’s value will rise by more than the U.S. dollar, in terms of its comparative purchasing power. As my colleague Laurynas Vegys recently wrote, “Twenty ounces of gold will still get you a pretty nice car, as it would have about half a century ago.”

Bitcoin can also be a long-term store of value, given its scarcity. Once the 21 million bitcoin limit has been reached, that’s it. No more bitcoins will be produced, meaning that each one will become more valuable.

Compare that to the world’s main fiat currencies. The central banks responsible for producing and regulating them are not subject to any meaningful limitations. And the currencies they produce are not tied to any physical commodity.

Therefore, the more they produce, the less each unit of their currency is worth. So both gold and bitcoin are eminently better stores of wealth than fiat.

Volatility – The price of gold has certainly exhibited volatility over the years. Yet, it has also had ample time to earn investors’ trust.

On the other hand, although bitcoin has shown much higher volatility, it has accumulated significant investor enthusiasm. 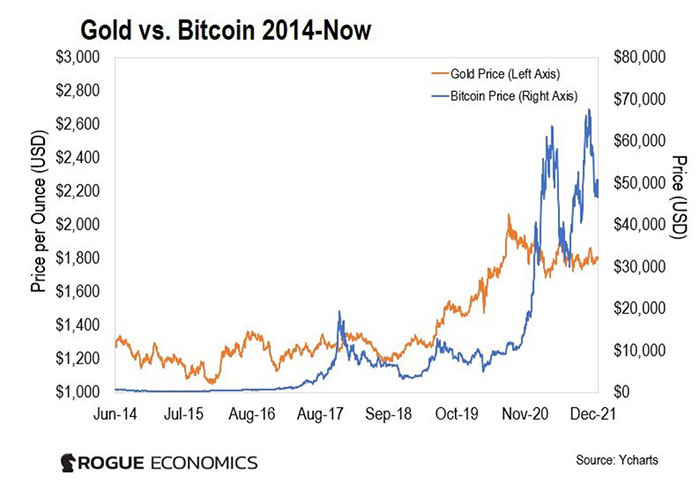 And it has amassed higher returns, especially in more recent years, even with periodic nosedives in price.

Of course, in terms of investments, volatility can mean opportunity, if you view it with the right analytical tools, which we will be doing for you.

Transactional Ease – Both assets are highly liquid, given the overwhelming demand for them from diverse sources. They can be relatively easily converted to cash or fiat money at fairly transparent exchange rates.

Overall, though, bitcoin is somewhat easier to convert through numerous online crypto applications, while there is more involved in converting physical gold.

Bitcoin proponents view the crypto as “digital gold,” that is easier to use, and offers rapid, secure, direct transactions, without any middleman, like a mega-bank, taking a cut.

Authenticity – It’s hard to counterfeit gold. Bitcoin is also protected from corruption by its encrypted nature. The blockchain technology that bitcoin is based on performs a vital and immutable transaction-verification function. And it is increasingly used for data integrity functions beyond bitcoin and other cryptos.

The upshot for you as an investor is that when weighing all of these factors collectively, both gold and bitcoin score points as solid additions to your portfolio to help grow your long-term wealth.

Bitcoin and Gold Are Sound Alternatives to Depreciating Fiat Currencies

The debate between gold vs. bitcoin isn’t going away anytime soon. In the end, time will be the ultimate arbiter.

However, consider how far gold has come, and how solidly it has performed throughout its long existence. Then look at how quickly bitcoin has transformed the financial and the monetary systems in its much shorter existence.

They are both manifestations of their environments – gold of the physical, geological one, and bitcoin of the virtual, technological one.

Here’s why we recommend holding both. For all their differences, they share one critical common theme – they both represent a sound alternative to the fiat currency system. This mutual element is most important in the current global monetary environment.

As I told you in my essay last Wednesday, governments and central banks around the world are playing a shell game with their currencies. They’ve created more than $30 trillion in new fiat money since the 2008 financial crisis. That represents roughly 75% of their total assets.

But that kind of irresponsible money fabrication comes at a price – each unit of currency is worth less and less.

And this won’t change dramatically, even if the fear and uncertainty around the Federal Reserve’s monetary policy creates interim market choppiness.

Now, I’m not saying fiat currencies are going to disappear any time soon. But the governments that issue endless amounts of them aren’t set to radically change their policies any time soon, either.

So holding both gold and bitcoin in your long-term investment portfolio is just the pragmatic thing to do. They both have a crucial role to play in protecting the value of your hard-earned money over time.

Catalysts are Lining Up for Precious Metals

This site uses Akismet to reduce spam. Learn how your comment data is processed.