No, it was not a great year for gold bugs.

But it wasn't a terrible year for the yellow metal either.

A look at a longer-term chart of gold shows us prices were mostly flat for 2021.

Regardless of gold's lukewarm performance, however, the demand for physical gold bullion last year skyrocketed.

According to the latest data from the U.S. Mint, sales of its gold bullion increased by over 67% to 1.44 million ounces last year — reported to be the highest levels since 2009. 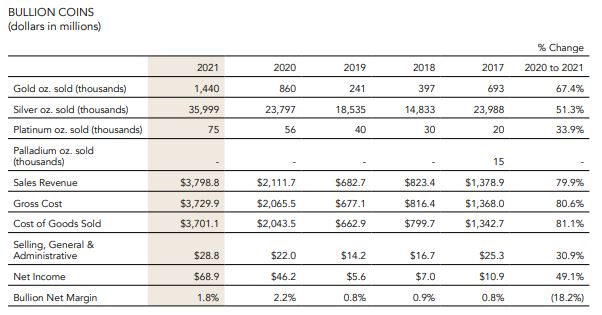 Meanwhile sales of U.S. silver bullion also saw increases. The Mint sold 12.2 million ounces of silver in 2021, an increase of 51% compared to the previous year.

Part of the increase in sales can be attributed to the Mint's redesign of the American Eagle.

Last year the U.S. Mint changed the reserve design of the American Eagle to coincide with the 35th anniversary of the coin series. 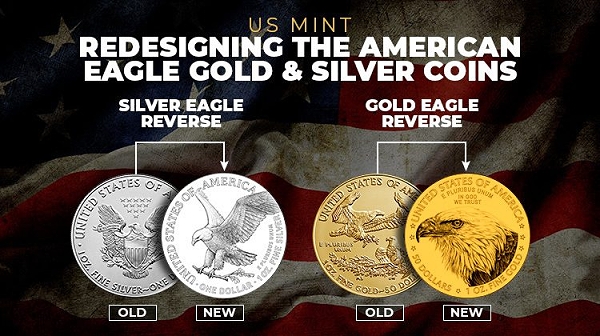 This redesign was heavily marketed and likely contributed to spurring sales. But the redesign didn't completely drive bullion sales.

On the other side of the world, Australia's Perth Mint also saw record sales last year.

According to data released last week, the Perth Mint sold over a million ounces of gold in 2021 — a 35% increase compared to the previous year and the Mint's highest sales numbers in a decade.

An increase in holdings of physical gold bullion is a good setup for a rally in prices. That's partly because of gold's liquidity.

The absolute fastest way to sell physical bullion is through a cash/check transaction or wire transfer. But both require way more time than selling a stock online.

A cash/check transaction can take several days, especially with large transactions. Bullion dealers don't keep large piles of cash in their back rooms for obvious reasons. If you walked into any legitimate bullion shop in America and wanted to sell $50,000 worth of gold, not only would you be required to fill out IRS paperwork, but you're going to get a check — not cash. Selling a gold ETF takes seconds.

Selling physical bullion via a wire transfer is a little easier and faster. But you still have to mail the sold bullion to the buyer, which always means you need to go to the post office. Selling a gold stock can be almost instant.

Point is, holding physical bullion typically slows the selling process for the investor. And a market with a lot of investors holding an asset that's a bit harder to sell is more protected from rapid sell-offs than other assets.

The truth is only a very small fraction of the population owns any kind of significant bullion holding.

Everyone has gold and silver in their house somewhere. But most of the time any valuable precious metals are in jewelry. And jewelry is typically not an investment-grade bullion asset, which has standard purities and weights for easy trading.

There is really no way to know for sure, but I have heard it estimated that less than 2% of the U.S. population holds any significant amount of physical gold or silver bullion.

So in the gold market, a little physical metal-buying goes a long way. If the estimate that less than 2% of the U.S. population owns any significant amount of bullion can be believed (and I do think it's at least close to accurate), just a small increase in the number of new bullion buyers can have a significant effect on the market.

Historical Data Disproves the Biggest Misconception about Gold...
How the Russian Gold Ban will Affect Your Investment
Gold Vs. Bitcoin: "Here's Why We Recommend Both"

This site uses Akismet to reduce spam. Learn how your comment data is processed.